Back around the middle of January and more by accident than design I became involved with a group making their own fan film celebrating 50 years of Doctor Who. At the time they had a specific prop request which I was able to help out with, which was quickly followed by a requirement for a Cyberman meaning a weekend of speedy building and then a further additional day of work as 24 hours before filming it was clarified they needed two of them!

It was slightly awkward having to phone work that morning to say I wouldn’t be in because I needed to take the day off to build a Cyberman (luckily I have an understanding boss…) and unfortunately such was the pace of the build that I was unable to take photos to fully document the creation of the Invasion suit.

Other than the dowel and plastic pipe for the arm rods (and all the spray paint) which necessitated a trip to B&Q at 08:00 that morning I had everything in hand as since 2002 it was something I’d be planning to put together, I just didn’t expect to be doing it in 9 hours.

Slight set back in that just after lunchtime I realised that it wasn’t the dark colours of the wetsuit that were making the applied silver spray paint far to pewter looking, it was that fact I’d bought Pewter coloured paint by mistake, prompting a run by the other half to Halfords to pick up the same colour I’d use for the hemispheres on my Dalek. Hurriedly respraying in the rain before packing it to drive to the shooting location unfortunately meant that not only was it still wet but that while wearing it for filming I was close to passing out from the fumes!

Alas the time constraints meant that I couldn’t get the leg rods finished (I should probably do it at some point ideally before the next time I get a days notice it’s required) and being on the inside of it didn’t even get any photos of me wearing it that night. Now that the relevant episode is out though, there is this screen cap as evidence it wasn’t all some fever induced dream… 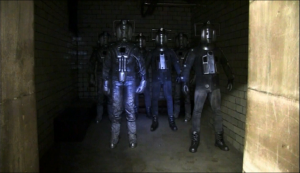